Lithium Batteries Do Not Have a Buddha-Nature

A little while ago, my Apple laptop stopped sitting properly on the desk. Some investigation revealed that the battery had done this: 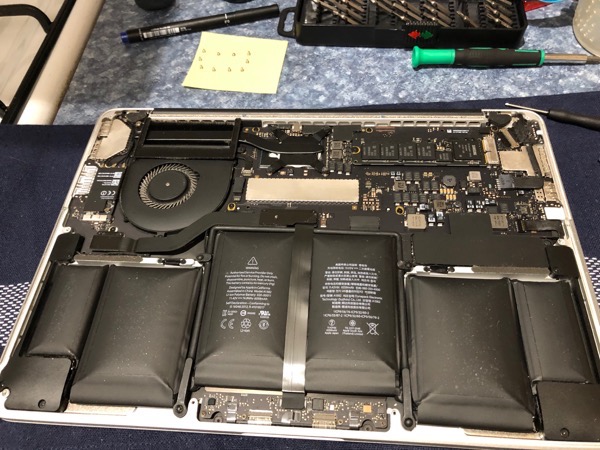 As you can see, the battery, which covers the entire bottom half there, had formed charming little pillows in all six of its compartments. That's bad. (And weird. It wasn't that old.)

Apple will not replace this battery by itself, because it's glued to the case. Their solution is replace the case and battery in one unit, which means you end up paying for, and creating as waste, a new keyboard, trackpad, battery, and upper case. I like to pretend that this extremely user-hostile and wasteful design is the sole reason for Jony Ive's recent departure from Apple.

You can, of course, do it yourself. All you need is a pentalobe screwdriver, a Torx screwdriver, methylated spirits for the glue, a new battery, and a burning anger in your soul. Removal is not easy and basically involves dissolving enough of the glue that you can lift the battery up a bit in order to get more alcohol under it to dissolve more glue. Multiplied by six compartments. But I eventually did it. Look how pretty and un-puffed it looks: 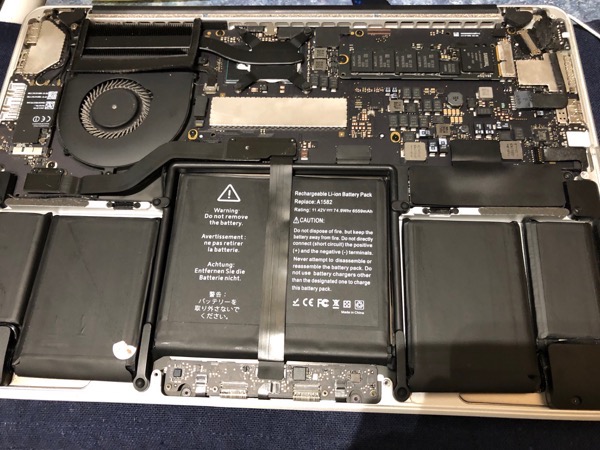 My favourite part about this picture is that the new battery, which is third party and thus always going to be used as a replacement, carries a large warning telling people not to remove it.

So now I had two batteries! A fresh new one in my laptop, and an old, puffed-up one, just sitting around. This wasn't as fun as it sounds.

The advice around lithium batteries online, over many sites, is always essentially the same and surprisingly bipolar. Everything starts by saying that modern lithium batteries are generally very safe and there is extremely little risk, and even when they’re removed and, you know, beaten up a bit, they’re not going to explode. Then there is always a dramatic switch in tone and you’re reminded that lithium plus oxygen and moisture is extremely flammable, battery technology is basically three or four failsafe mechanisms stacked on top of a small incendiary device and, oh, by the way, if they’re puffed up at all that means all the failsafes have failed except for the thin plastic shell, which is now filled with hydrogen gas.

When they’re in that state, to avoid what Apple calls a “thermal event”, you should not: charge the battery, rapidly discharge the battery, let anything contact the battery terminals, bend the battery, expose the battery to sudden shocks, be angry within 50 metres of the battery, hold any metal objects in the same house as the battery, or think bad thoughts about battery-kin. The number of ways you can cause an explosion is rather like this scene from Parks & Rec. Heaven help you if you actually touch it, let alone bend the fucking thing while digging it out of a computer case. You can't throw it in the bin, because spontaneous combustion, but also because it's poisonous ewaste. Apple and its authorised service centres won't dispose of it when it's not in a case, apparently because it's much easier to talk about your environmental record than it is to actually help your customers dispose of the environment-destroying chemical explosion bag which you sold them.

Anyway, as you may know, it’s possible to read the Internet too much. After a few of the above sites I had become, let’s say, rather cautious about my little bomb. I asked questions of myself like “what is the least annoying place to have a lithium fire?”, which is like those kōans in which the best answer is to unask the question. I’d been storing the battery on a metal tray either literally in the oven or at least on the hob. I had visions of the recycling centre people not only refusing the battery, but also arresting me on the spot for environmental pre-crime. I thought that the final resting place for this battery would be deep underground in an unmarked grave somewhere.

But, surprise! The paranoia was misplaced. The giant of a recycling centre employee took the battery into his hands and started folding it up, while affably telling me that I’d need to recycle my cardboard elsewhere. I left too quickly to see where he eventually put it, but as I drove away the centre did not burst into flames, so perhaps they know what they are doing.

My conclusion: I did the best possible thing, both for myself and the environment, and the computer shop guy who refused to do the repair for me on the grounds that it was extremely dangerous is a pussy.

(By the way, how do you recycle ewaste if you don’t have a car? Couriers are unsurprisingly disinclined to transport damaged batteries. Public transport, with the battery, to a station followed by a long walk? Maybe the attitude is that if you’re too poor to afford a car you shouldn’t be buying computers.)